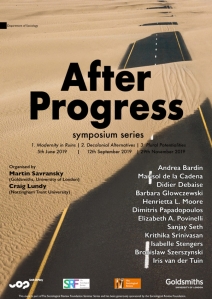 In this forthcoming symposium series, we propose to experiment, from an interdisciplinary and global perspective, with a pressing question for our troubled times: can we reimagine human and more-than-human arts of living and flourishing from the ruins of the modern idea of progress? The notion of “progress” is arguably the defining idea of modernity: a civilisational imagery of a boundless, linear, and upwards trajectory towards a future that, guided by reason and technology, will be “better” than the present. It was this notion that placed techno-science at the heart of the modern political culture, and it was the global unevenness of “progress” that imagined European imperialism as a civilising mission inflicted upon “backward” others for their own sake.

Thanks to the relentless work carried out by decolonisation movements, as well as by scholars and intellectuals across the social sciences and humanities, the modern idea of progress and its deleterious consequences on a global scale have deservingly been the object of fierce criticism throughout the second half of the twentieth century. Denouncing its Eurocentric colonialism, its impoverished historicism, its rationalistic hubris, and its ecocidal extractivism, such criticisms decried the implications of the modern idea of “progress”, but they did not stop it from commanding global political imaginations, discourse, and policy to this day. Thus, rather than simply rehearsing such critiques, we propose a collective, speculative experimentation on plural arts of living and flourishing with others in the ruins of “progress”. For even at this time of socioecological devastation and perilous political repatternings, there are practical and conceptual propositions, emerging from a range of locations and experiences, that proffer generative contributions to the questions of how we might understand and effect change, learn to live and die well with others, and make other worlds possible, if we no longer rely on the modern coordinates of progress as our compass.

Bringing 4 excellent guest speakers to discuss these and related questions on each session, these half-day symposia will take place at Goldsmiths, University of London, on 5th June, 12th September, and 29th November 2019. All welcome! Details on timetable, registration (required), and some bursaries for unfunded PhD students/ECRs, will be announced very soon. Watch this space!